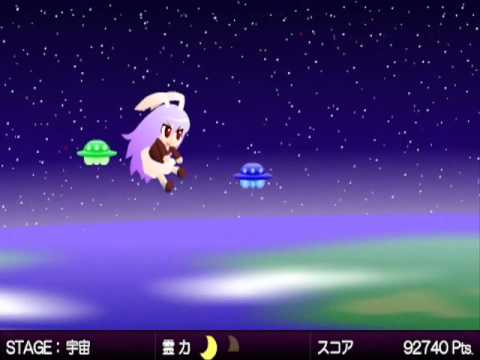 Link to a reuploaded version that preserves the annotations:

This game can be found here:

This game is keyboard-controlled. Now, the goal is to keep Reisen from falling off the bottom of the screen for as long as possible as she travels through various areas. She’ll be constantly running forward, but you can use left and right arrow keys to adjust her position, and press Z to jump.

You can also jump again while in midair by pressing Z again, but doing so consumes a moon. You start with five moons, and you can midair jump as many times as you want until you run out of moons. So, while you don’t want to waste them, make sure to use them if necessary to stay on the screen, because if you fall off the screen, the game ends anyway. However, the used moons will slowly recover while you’re standing on something (or bouncing off of mushrooms in one area), so don’t feel too bad about having to use them, because they can be earned back.

Now, as you advance through the areas, the platforming will generally get trickier and you’ll probably find yourself making “moon jumps” more and more often. The platforming starts off fairly basic, but gimmicks start appearing before long. One area is comprised of mushrooms which cause you to automatically bounce off them, though each bounce does recover half of a used moon, so it might be a good place to recover (also, a yellow mushroom might appear on rare occasions, and hitting it launches you off the top of the screen for about 4 seconds). Another area has butterflies that fall after you land on them, so jump quicky (though you’ll probably be jumping quickly anyway). There’s also an area that seems to be a reference to the Hopping Tenshi game, but it’s very easy and is an excellent place to recover your spent moons. After that, you’ll be jumping on a lot of small UFOs that move in a few different ways, and if you make it past that lengthy part, you’ll end up having to dodge missiles (I think they’re Mimi-chans, actually!) as you’re falling back to Earth, but you’ll have unlimited moons during the missiles part, so jump as much as you need to there! After the missiles, the game loops back to the beginning, but goes faster.

Now, the longer you stay alive, the more points you accumulate. However, you accumulate points faster if you move towards the right side of the screen. As you approach the right side of the screen, your score display will change color and increase faster:
Green: 2x
Yellow: 6x
Red: 16x
Obviously, you want to be in the “red zone” on the far right as much as possible, but it’s risky, as you’ll have practically no time to react to what’s coming up there. Still, there are times (like at the very beginning or after hitting a yellow mushroom) where you’ll want to be hugging the right edge of the screen. Note that during the Hopping Tenshi and missile firing parts, you can’t get a boosted scoring rate no matter where you are, so don’t worry about being in a certain position for those parts.

If you manage to complete one loop of the game, you’ll unlock an “Extra” mode where you play the same game as Tewi. She has a higher basic jump than Reisen, but she can’t “moon jump” (she’s not a moon rabbit like Reisen), so one slip up will end the game. Her scoring rate for being near the right side of the screen is much higher than Reisen’s as well:
Green: 3x
Yellow: 14x
Red: 54x (!)

(Jan. 12, 2019 EDIT: Redid the math on all the score multipliers. These are the correct values, I believe.)

There are separate high scores for both points scored and distance travelled (so you can just play it safer near the left side of the screen, ignoring points and shooting for distance if you want), and there are separate tallies for both Reisen and Tewi. I’ve managed to get in various spots on all four leaderboards.

Hmm… I wonder what Touhou flash game I should make a video of next… If anyone has any suggestions for a Touhou flash game for me to play, I’ll consider it, but there are no guarantees. It will kind of depend on whether I like the game enough or not.

Feel free to comment, but just know that I dislike profanity. Any comments containing F-bombs and/or S-bombs will be shot down by missiles! (In other words, they’ll be deleted.)
(Comments containing other types of inappropriate content may meet this fate as well.)