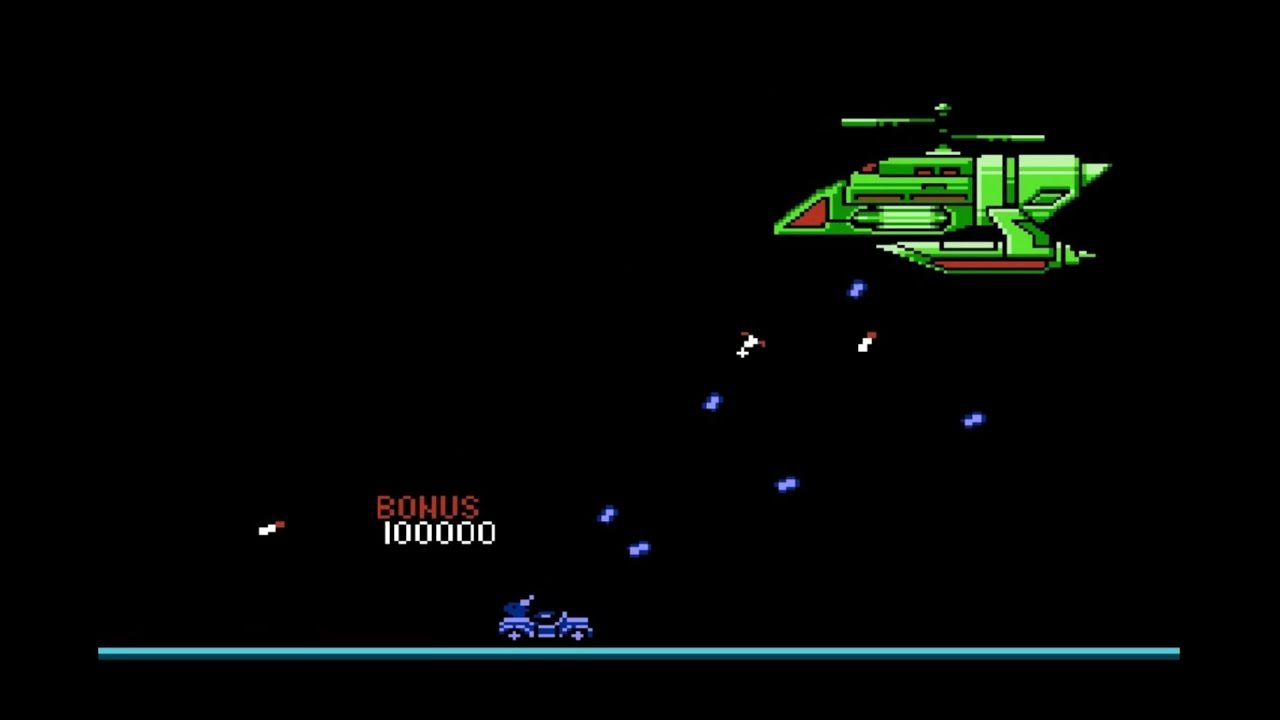 I finally fucking did it! After a solid week of losing sleep over this game I was able to beat the fucking thing. If you can beat this game using the chopper than consider yourself an elite player when it comes to shooters. Be the jeep. Now, level one is quite easy. There is an enemy known as a Snakehead that starts in four parts and forms a bigger craft. I used to wait for it to form and try to take it down that way, bad idea. Shoot the white ship before it forms and you will upgrade your ship faster and receive more points in the process. You can even take invincibility as I do in the video and kamikaze it while shooting for a simple kill. For the level one boss the screen will cut away briefly to an all black background for fighting against a huge tank that you have to jump and shoot at. It’s a huge pain in the ass. Do this though, hold down the jump and shoot buttons before the screen cuts to the boss and press to the left as well. If you hold down these three buttons you will beat the boss every time even with your eyes closed. For level two, I am sure you can figure it out on your own and as for the boss you have to move around a lot and be good at shooting down enemy heat seeking missiles while avoid their bullets. You basically need to turn your mind off and just avoid the bullet and trust that your constant stream of bullets will shoot the missiles they fire down before they hit you. It may seem like you have to constantly move around but if your calm you can just jump straight up to avoid the bullet and get into position to attack the enemy weak spot. Level three has things getting a bit tougher. Just remember to take out the ground turrets ASAP and play it safe. The boss has a guaranteed kill method as well. Just get about a quarter inch in front of it and blast the shit out of it until it’s dead. The level 5 boss is exactly the same and this strat is what made this game completion possible. Level four isn’t too bad, just more of the same shit with a boss similar to level two. There is a 500,000 point bonus emblem in the boss room but don’t worry too much about it. Level 6 is fucking easy; there are lots of invincibility power ups to make use of and lots of easy ground targets. Watch out for those robot assholes, they will screw your run up. Level 7 is actually really hard. I don’t think after completing it 15-20 times that I ever did so without dying. Level 8 you need an emulator to practice with. Most of the levels you will play often enough to know what enemies are coming, and that helps, but level 8 you need to devise a solid walkthrough so you know you can pass it in one death or less. The level isn’t too bad if you follow what I do in the video, staying left as much as possible to cover more of the screen with your shot and to allow you to move slowly right to avoid those Silkworm missile fuckers. There was a really hard part that always killed me but I circumvented it by moving all the way to the right and letting two enemies fly over me while shooting up to kill the invisible ones. This was another game saving strat. There is a ton of crap on the screen when the power station comes at the end of the level. I even was killed from an enemy I never saw and looked like some kind of teleportation glitch. Pissed me off cuz I needed every life I could muster. Just shoot the shit out of the power station and move on. The final boss is a bit tricky though. Just try to remember that you should only be trying to avoid the bullet he shoots and not the missiles. It’s impossible to actively dodge both because we aren’t machines and we need to blink from time to time. Just avoid the bullets and pray you shoot the missiles. Remember to move underneath him when he zooms in and then jump back over the projectiles to return to the attacking side. Don’t think about hitting his weak spot, in fact don’t even look at it unless you have a clear opening. Just dodge. Eventually you will complete the game in this way. It took me about 20 hours playing the chopper and about 6-8 with the jeep to bring this game down. Now I think I could do it rather consistently. One or two level deaths are tolerable assuming you have the boss fights down pat. So that’s it. I am really pumped up. This might be my biggest gaming achievement ever and also the first time I really used everything at my disposal to figure a game out. I’m just glad three of the bosses have unstoppable strats otherwise I’d still be playing this game. Fuck this game, now I can sleep.