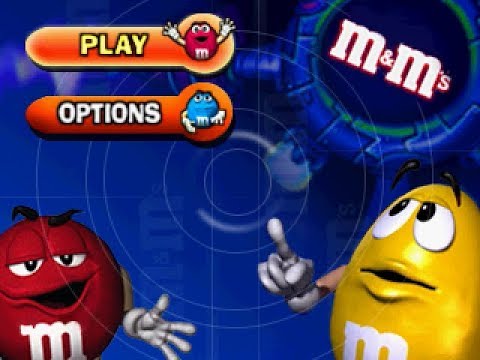 Not much to say on this game other than it is an awful game. It has some nice inter level fmv sequences but the gameplay is horrible. On each level you wander around a fixed path jumping on boxes to release M&Ms and navigating plat forming obstacles. The problem is the camera often blocking your view or it will swing around while you are jumping causing you to completely miss the landing.

Of course that is not the worst of it. The collision detection is so bad that there could be a whole block of empty space between you and the nearest box/foe and it will say you hit it and died. Also jumping tot he side of the screen it will say you hit the wall even though there is plenty of room around you. Its a good job the game throws lives at you if you collect the boxes.

I collect all the formula collectables (M&M packets) found in the dark brown boxes. Allows be to play the bonus stage once in each level other than the first. It doesn’t add anything to the story/ending of the game so largely a waste of time. Quite often the bonus levels are the same each time anyway.

While pepsiman clearly had some time spend developing the game, this game definitely did not and seems like the entire budget was put into the fmv sequences although they ran out of money at the ending sequence so it only has half the frames. The game could probably be finished in 30 mins or so if just rushing through it, not hitting boxes collecting lives.