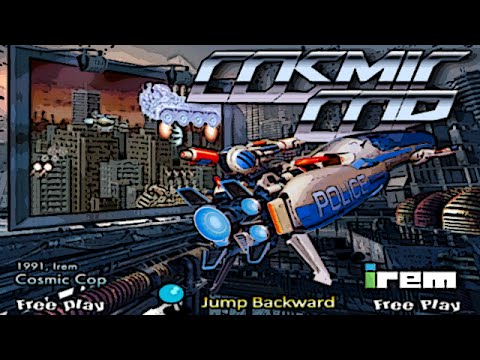 Armed Police Unit Gallop (アームドポリスユニットギャロップ Āmudo Porisu Yunitto Gyaroppu?) (a.k.a. Cosmic Cop) is a side scrolling shoot-em-up arcade game produced by Irem in 1991. It is part of the popular R-Type video game series.

Taking place concurrently with R-Type Delta, Gallop sees the player as a member of the like-named private security organization tasked with hunting down autonomous vehicles driven berserk by the Bydo, dubbed “Mad Cars.”

The player pilots an R-Type fighter, the R-11B Peace Maker. As in most horizontal shooters the screen scrolls continuously to the right, but Gallop is unusual in that the scroll rate can be controlled by the player. The further right the player’s craft is oriented onscreen, the faster the game scrolls.

Gameplay progress through five different “zones,” each culminating with a boss. Significant bonus points are awarded for completing the zones quickly.

Picking up a letter “M” will equip the R-11B with a missile unit that will fire one of three types of munitions: anti-air missiles, anti-ground missiles, or napalm bombs. Contact with any terrain will cause the missile unit to be lost, however.

Another game with post-apocalyptic/cyberpunk theme but this time gameplay is similar to this in R-Type or Thunder Force, a horizontal shmup where you can collect 3 types of upgrades: power up your main weapons like laser with primary gun and pick up sub weapon upgrades (two types of rockets and bombs). Because it’s another game with you-die-so-return-to-a-checkpoint, god mode is turned on.