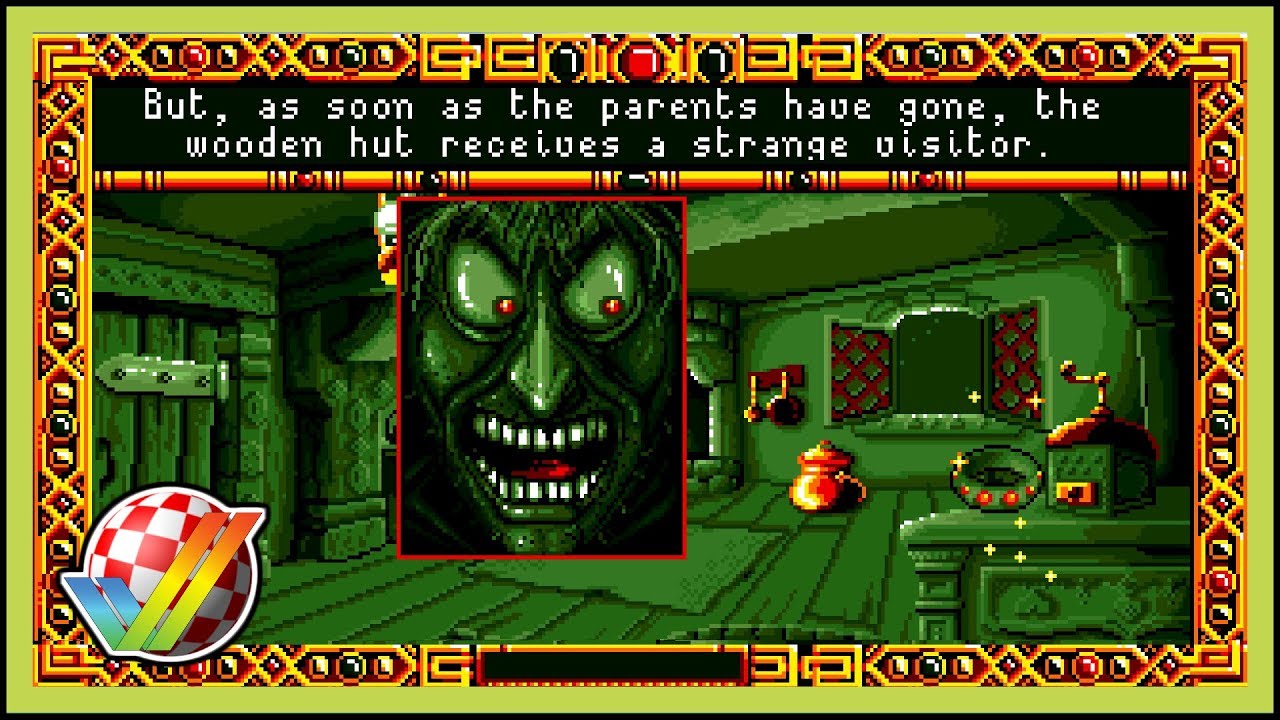 There are two version of this game – Abracadabra and Baba Yaga. There’s a lot of differences between them, like graphics, creatures, fonts, items, etc, but are mainly the same game.

In Abracadabra it’s winter and you are delivered by a dragon. The evil dude of this version is Satanicus, the horrible magician.

In Baba Yaga it’s summer and you are delivered by a stork instead, and the evil person is Baba Yaga, the wicked witch of the swamp.

I guess they both cater to different audiences. In Slavic myths, Baba Yaga is the wild woman or dark lady of magic, she has chicken legs. There are many stories about her in Russian folklore.

You have no control over the text/dialogues most of the time, so you have to wait for the next one. In some places the scene fades out at the same second the last text is shown, so can’t be read unless you pause. Sometimes it’s a bit too fast. Anyway, it’s not me clicking or anything, just so you know 🙂

When selecting the look of our hero, the two left-most portraits look female (I’m sure they are, or at least the one to the farthest left). So, I decided to be male (Adam) in abracadabra, and female (Eve) in Baba Yaga, but turns out the game doesn’t know this and still call her “he”/”him” in the dialogues, even if I select the first one from the left.

If you don’t select a head, clothing or name in time, the game does it for you, and you get the default colors and the left-most head, and are given the name of “Nemo”.

One thing that is kinda fucked-up is the baby is delivered to those poor woodcutters. They are POOR! The last thing they need is another mouth to feed, IMO.

In Baba Yaga I played on hardest difficulty (and was the first of the two games I played through). the difficulty is too high and I’m sure they didn’t play-test it. Because of this, I played Abracadabra on easy.

When you die you are just moved one screen/scene back.

After the ending, I right click to bring up the menu and select to return to the menu, then to get dropped at the castle instead. After the first room has been completed, I bring up options again in the next scene and quit, because from her on out, it’s the same as the previous “journey” via the woodcutters.